HACD, full name Hacash Diamond, is the native NFT on the Hacash blockchain and was invented by an unknown person or team in 2018. The first HACD was mined and bided on May 16, 2019.

It also has more first-of-its-kind features.

Each HACD is mined by a computer through an algorithm. Unique six letters, shapes and colors will be generated at random. The six letters are from WTYUIAHXVMEKBSZN, so the total number of HACDs is 16^6 = 16,777,216.

HACD has a total of 9 shapes with different numbers of color blocks filled randomly by 16 colors. 8 special shapes have a 3% probability and one common shape has a 97% probability.

If Bitcoin is NFT, the closest thing is HACD.

HACD inherits all the advantages of Bitcoin. It upgraded the three core mechanisms to become a better store of value.

1. Mining is only getting harder and can far exceed the difficulty of Bitcoin mining.

2. Mining is on-demand and production can be reduced or stopped.

3. It needs to burn another PoW coin, HAC for bidding. The bidding system adjusts the cost of HACD production based on market conditions. 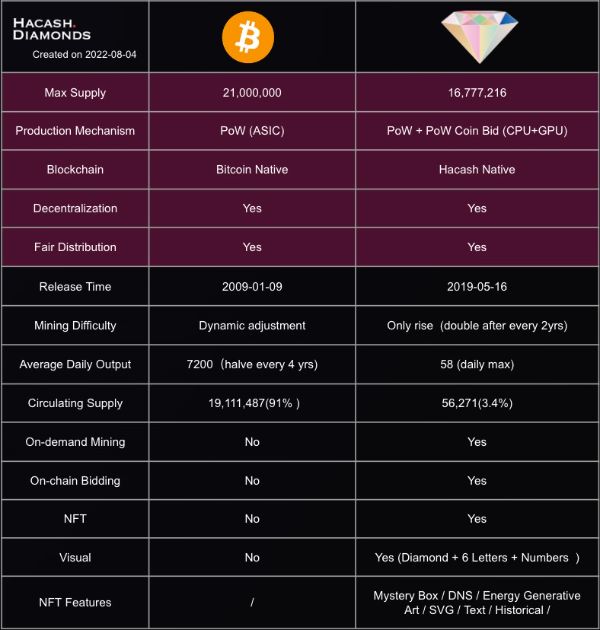 Generate a piece of artwork from nature's energy by blockchain.

HACD is not like other on-chain generative arts. HACD consumes energy by running Proof-of-work algorithm. It generates specific diamond images by machine. The generation process is random and cannot predict in advance.

Generating HACD is the similar as mining Bitcoin, which requires only a personal computer at the beginning. However, HACD gets harder to generate as the mining difficulty increases. This is when higher performance GPU machines are needed to mine it.

HACD is not generated using a smart contract. It is a string of data generated from a 32-bit hash that has compressed and calculated to meet a specific format.

Specifically, it hashes the hash value of the last block containing the HACD plus the owner's public key and a nonce number to get a 64-bit string value. It compressed into a 16-bit string value by the diamond_hash algorithm.

Satisfying the first 10 bits as 0 and the last 6 bits as letters, a valid HACD is mined.

HACD is the first on-chain generative art that does not need image files to be stored and transmitted anywhere.

What is stored and transmitted is the visual gene of HACD and the visual expression algorithm. It takes up only 10 bytes, which is 1/3 the size of the transaction hash.

Any end device that needs to display HACD is processed into an SVG image by a visual gene through a visual expression algorithm.

A non-stop on-chain art auction attended by miners from all over the world.

The block time of Hacash is on average every 5 minutes. HACD goes through 5 blocks per mining and bidding session, which is about 25 minutes. Each HACD will only appear in blocks with a block height of 5 or 0.

The bidding settlement unit for HACD is another PoW coin, HAC, on the Hacash chain. 90% of the HAC will burn at the end of the bidding, and the remaining 10% will award to the miner who added the HACD to the block.

Every 25 minutes, the miner who has mined a 6-letter HACD is eligible to open a blind box once. But only one miner with the highest bid gets to open his or her blind box and show what the HACD looks like.

HACD was openly launched without pre-mining or any other preallocation.

HACD is different from the vast majority of NFTs. There are no reservations or incentives in the allocation.

All HACDs are initially mined fairly through PoW and then allocated through bidding.

The total number of HACDs is close to the number of bitcoins, over 16 million. And only a maximum of 57 HACDs can be generated per day. so everyone has a chance to take part in mining and bidding for the next HACD.

Also, the Proof-of-work can cause people to worry about HACD will be monopolized by big hashing power. But, HACD's on-chain bidding can prevent a situation where all the HACD is taken away by the big miners or NFT bots.

Imagine what would happen if the difficulty of mining a bitcoin only went up.

In other words, all the energy on the planet at that point will not be enough to mine a single HACD.

This design controls the output of the HACD. When there is no longer a demand for HACD in the market, no one will spend a lot of power and machine costs to generate HACD.

Even without the difficulty setting, 16,777,216 HACDs would have taken 800 years to complete. By the end of the 21st century, also only less than 1.7 million HACDs could be generated.

Scarcity To Be Discoverd

Shaped HACD in type 9 sets and heart-shaped HACD are also scarce, and these are clear scarcities.

But the scarcity that was discovered midway through the market turned out to be the HACD with the highest unit price currently traded. The bottom four color blocks containing the same color of the common HACD have surpassed the price of a single bitcoin.

Also shaped with the same group of color sets with the least number of individual HACD color matches are extremely scarce.

There are many other combinatorial ways to play. You can go for sets and twins. And collectors from different cultural backgrounds can also discover different meanings of the letters.

There are 16^16 possible colorways for the common HACD, and it is basically impossible for them to appear identical. More than 50,000 HACDs have been generated today, already extending an extremely rich and unpredictable scarcity play.

Available to trade on CEX

HACD can be traded on the NFT marketplace, DEX and CEX.

HACD is unlike other NFTs that can only be traded on NFT marketplaces. Although every HACD piece is special. Due to its generation mechanism, most common HACDs are worth the same to collectors.

HACD is technically can be traded in bulk on centralized exchanges such as Binance. And it can be added any trading pairs.

HACD is your private bank.

A HACD can lend HAC on Hacash to enhance the liquidity of HAC. Returning the HAC will burn a certain amount of interest, making the HAC a deflationary asset.

Details can be found at https://github.com/hacash/paper/blob/master/HIP/lending/lending_standard_specification.en.md

Your collection, your identity, your brand.

A HACD is not like an ENS, but it can assume the functions of a DNS. This is because each HACD has a unique address that owns it.

It will become Hacash's personal identity(DID), enhancing the collectability value of the HACD.

Besides, each HACD has a unqiue six letter that is earlier than the Text-based NFT Loot.

Energy-Generative Art: A New Way of Creating from the Bottom-Up

Why PoW NFTs are the Next Blue-Chip NFT Collections